In and behind the glorious building of the former milk factory “De goede verwachting” (“The good expectation”) Loos Cacao B.V. is situated. In the Dutch countryside at the village Berkhout one can see the company from a big distance. Being seen from here it looks like a small company, but at this time 40 to 45 employees are working here full time. The company nowadays has become an important partner for the Cocoa industry with customers all over the world.

Loos Cacao is a typical family company. Founder Piet Loos is retired for several years now, the current direction consist of daughter Margret Veld-Loos, Dennis Veld and Hans Houter. The company in its actual form only exists since 1993, however the company has, although in another form, a longer history. 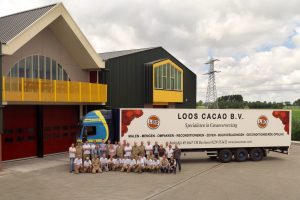 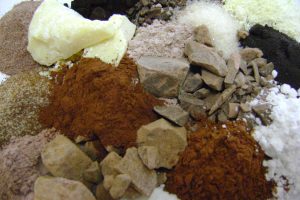 At the end of the sixties Piet Loos started with the transport of and trading in hay, straw and rough feed for live stock. He combined this with a business in tiles and granite. Because of several changes in the economy the company had to re-position, and for this, in 1984 Loos Bobeldijk B.V. was founded. In that time the production of Bentonite was the main activity. Bentonite is a product that can swell up to five times its own volume and is mainly used in the offshore-industries.

To make the company structure more transparent the company was split up. For this the mother company LBD Beheer B.V. (LBD = Loos Bobeldijk and Daughters) was founded. Loos Cacao B.V. and Loos Bobeldijk were put under this umbrella. Loos Cacao B.V. primary aimed itself to the grinding, mixing, reconditioning (sieving and de- ironing) and re-packaging of Cocoa products. Loos Bobeldijk B.V. on the other hand aimed itself mainly on the grinding, mixing, de-ironing and packing of granulates and pulverised foods other than Cocoa. Also the production of Bentonite fell under Loos Bobeldijk B.V.

Because of the fact that the cocoa activities took such a big flight, and to avoid odour contamination, the processing of the weeds, pod fruits, herbs and spices was stopped. In 2003 the production of Bentonite, the only non-food product, was also ended. This product didn’t fit between the Cocoa and the space could well be used for the Cocoa expansion. Because there were hardly any activities anymore within Loos Bobeldijk B.V. this company has gone up in Loos Cacao B.V. and for this the company only profiles itself now as Loos Cacao B.V. 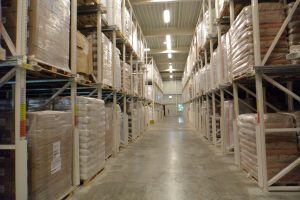 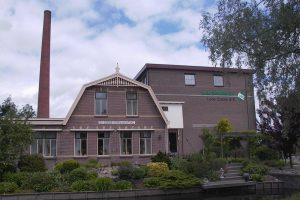 As mentioned before the company is situated in and behind the former milk factory of Bobeldijk in Berkhout, about 25 miles north of Amsterdam, just besides the motorway A7. The significant old factory chimney, that is still standing strong, can be seen from far and can be used as a guide.

Over the years the former milk factory and additional buildings, which were build in the years 70, were made suitable for the processing of Cocoa. In 1997 two new conditioned production halls were build in which the Cocoa is processed. This under the highest hygienic standards. In these buildings the main office is situated. In 2008 another building was realised with all the necessary facilities for the employees, our laboratory and a storage facility for the cooling of the products.